The Putnam County Agricultural & Industrial Fair will be 166 Years Old in 2022.
This will be the 96th continuous Putnam County Fair! 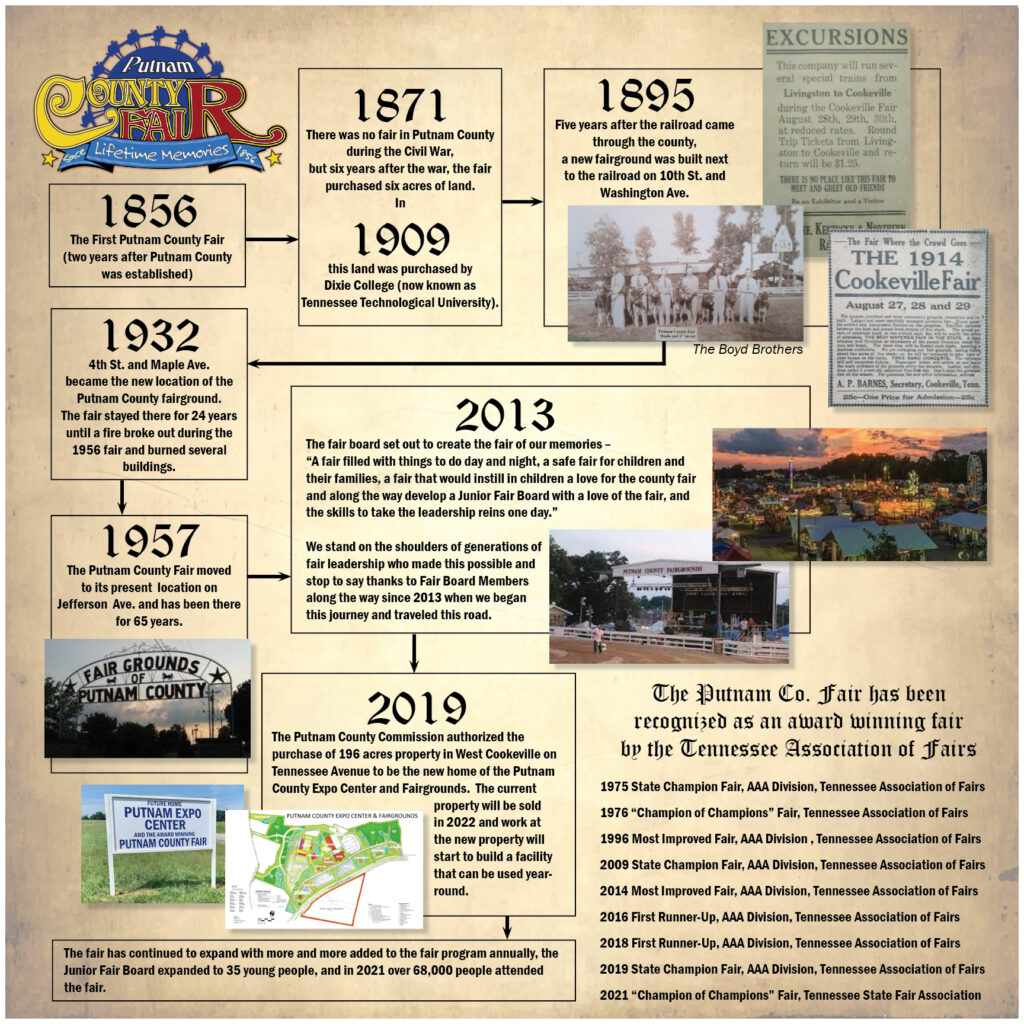 Since the first Putnam County Fair in 1856 only wars and pandemics have interrupted its annual late summer gathering. Neighbors meeting neighbors, sharing the abundance of the harvest from gardens and fields, and exhibiting livestock, dairy cattle, horses, hogs, and poultry.

It all began two years after Putnam became a county … Putnam County was re-established as a Tennessee County in 1854 and our first Putnam County Fair was held two years later in 1856 just north of the square on C.E. Wilson’s property on Dixie Avenue. The fair was not held during the Civil War. Six years after the Civil War in 1871 the fair board purchased six acres of land for $60. This site was still known as the old fairgrounds in 1909 when Dixie College acquired the land. That property is now the quad at Tennessee Technological University.

In 1895, five years after the railroad came to Cookeville, a new fairground was built next to the railroad near 10th Street and Washington Ave. The fair had its own railroad spur, which would bring fair goers from as far away as Nashville and Harriman. In 1932 another site became the fairgrounds at 4th Street and Maple Avenue.

The fair stayed there for 24 years until a fire broke out during the 1956 fair and burned several buildings. The next year we moved to our present location on Jefferson Ave., and it has been in this location for 65 years.

In 2013 the fair board set out to create the fair of our memories – “A fair filled with things to do day and night, a safe fair for children and their families, a fair that would instill in children a love for the county fair and along the way develop a Junior Fair Board with a love of the fair, and the skills to take the leadership reins one day.”

This we have done year by year, ever expanding and adding more and more to the fair program annually, expanding the junior fair board to 35 young people, and in 2021 it all came together and over 68,000 people attended this year’s fair.

We stand on the shoulders of generations of fair leadership who made this possible and stop to say thanks to Fair Board Members along the way since 2013 when we began this journey and traveled this road together.

In 2019 the Putnam County Commission authorized the purchase of 196 acres property in West Cookeville on Tennessee Avenue to be the new home of the Putnam County Expo Center and Fairgrounds. The current property will be sold in 2021 and work at the new property begun to build a twelve month facility.

The Putnam County Fair has been recognized as an award-winning county fair by the Tennessee Association of Fairs.